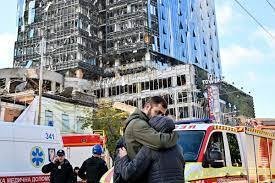 Russia’s brutal missile attacks on civilians are doomed to backfire. Here’s why Putin launched them anyway

Less than 48 hours after the Kerch Bridge connecting Crimea with Russia proper was damaged by a powerful blast, Vladimir Putin retaliated against Ukraine. Russia fired close to 100 missiles at a variety of Ukrainian cities on October 10 and 11. The rockets hit an array of buildings, including residences and schools, killing at least 19 civilians and injuring more than 100.

On October 17, Russia launched new strikes on Kyiv, the Ukrainian capital, with “kamikaze drones” — low-flying drones that swoop toward their target from the sky and blow up on impact. Early reports said that at least three people were killed and some 18 were wounded in the drone attack.

While the attacks from the past week knocked out power and water to Ukraine’s largest cities, the military value of the attacks was dubious at best. Civilian infrastructure has been the main target. Ukraine’s population seems ever more determined to resist Russia. Experts pointed out that Russia retains a scarce number of precision-guided missiles, and it seemed like a waste to use them on these kinds of targets. Looking ahead, the attacks may well have also created a permission structure for NATO to arm Ukraine with better air defenses. Oh, and there is also the whole “blatantly violating the laws of war” thing. Even India and China are trying to generate some separation from Russia.

So Russia’s missile attacks may have violated international law, alienated longstanding partners, hardened the determination of Ukraine and its allies, and expended scarce munitions without altering the situation on the battlefield. Why did Russia do it?

Trying to explain current Russian foreign policy behavior is complicated, because rational-actor stories have not proven to be a great guide to analyzing 2022. Many experts and policymakers predicted that Russia would not attack Ukraine because it would prove to be such a costly and risky action to take. Indeed, Putin’s initial decision to invade Ukraine seems like an example of what not to do in international relations. The fact that he did it, however, means we need alternative explanations for Russian behavior.

With constant — often flawed — comparisons now being made to the Cuban missile crisis, perhaps it is time to approach this question as Graham Allison, a longtime political scientist and sometime US government advisor now at Harvard’s Kennedy School of Government, did when he wrote Essence of Decision. That 1971 book provided a Rashomon-style explanation of the crisis, using bureaucratic and organizational approaches as well as the rational actor model — the idea that countries can be simplified down to unitary strategic actors pursuing the national interest — to explain US and Soviet behavior.