Copyright 2021 - All Right Reserved
Home Economy As interest rates rise, a series of ‘debt bombs’ are threatening some of the world’s poorest
EconomyFeaturedOpinionWorld News 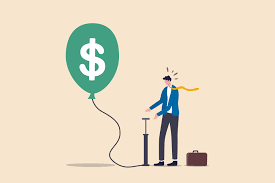 When Ghana suspended interest payments on most of its external debts this month, it was the national equivalent of someone not making the minimum payment on their credit card.

For years, the small West African nation had made the most of historically low global interest rates to borrow, borrow, borrow — and investors, lured by high growth rates as Ghana’s economy enjoyed a debt-fueled boom, had been more than happy to lend, lend, lend. So much so that when the country tried to raise $3 billion in new borrowing as recently as 2020, five times more investors than needed lined up to lend the country money.

But that was then. Now, Ghana has been locked out of the international markets where countries go to raise money from investors, its credit card effectively frozen.

The result: A country of 31 million people raking in funding not long ago has been forced to seek a bailout from the International Monetary Fund (IMF), the global backstop for struggling economies, as its government and its people struggle to make ends meet. The capital Accra has seen repeated protests by ordinary Ghanaians who are suffering as prices of everyday goods rise at an eye-watering pace, climbing last month at a rate of more than 50 percent — a 21-year high. Public sector hiring has been frozen, while a host of government officials have been forced to take pay cuts. As the country’s president, Nana Akufo-Addo, whose salary has also been reduced, conceded in a recent address to the nation: “We are in a crisis, I do not exaggerate when I say so.”

It is a crisis that has been in the making for years: the latest in a series of so-called debt bombs that have pummeled nations around the world.

Accra was only one of several capitals that took out cheap loans in recent years. As Grid has reported, those loans have become enormous burdens in many countries as inflation and interest rates rise. It’s a phenomenon that is squeezing budgets everywhere from Lebanon to Egypt, Kenya, Pakistan and beyond. In turn, this is forcing governments to cut back on spending at a moment when they are still dealing with the fallout from covid-19.

Throw in the effect of the war in Ukraine, which has fanned global food and fuel prices, driving up the cost of living internationally, and the world is left facing the very real prospect of a series of economic explosions that could affect the lives of tens of millions of its poorest people.

This is why Sri Lanka — which earlier this year saw its government implode following a wholesale economic collapse — was seen by many experts as a warning signal.

It is also why the news from Ghana “did not come as a surprise,” as Francesc Balcells, an expert on debt in emerging markets at the London-based investment firm FIM Partners, told Grid.

“It was pretty clear that their debt was unsustainable,” he said. “One very clear indicator for example was how much of their revenue they spending servicing their debt — the number was staggeringly high.”

A case of exploding balance sheets

So then who comes next? Which countries, in other words, are most vulnerable to Sri Lanka- and Ghana-style financial nightmares?

In Ghana’s case, the country was spending around 70 percent of its revenues on paying the interest on the loans it had taken out, according to Reuters figures.

The comparable figure for Sri Lanka is over 100 percent. After Ghana, next in line is Pakistan, which is spending just over 41 percent of its revenues on interest payments; Egypt is in an identical predicament. Pakistan is already reliant on IMF support; ditto for Egypt. The support has been critical to the countries avoiding catastrophic defaults.

Looking ahead, in Africa, analysts are closely tracking countries that face hefty payments in coming months on the bonds they issued to investors: Nigeria, for example, has a $500 million payment due next summer, according to the Fitch financial ratings agency.

In total, over the course of 2022, the World Bank estimates that public and private debt service payments by the world’s poorest countries stood north of $60 billion — or 35 percent higher compared with 2021. The fallout from this couldn’t be clearer; as the bank’s president, David Malpass, put it just weeks ago, “The debt crisis facing developing countries has intensified.”

It all adds up to a reversal on a grand scale. Until a few years ago, low interest rates meant that borrowing was easy and cheap for these countries, helping fuel growth (as in the case of Ghana). But as interest rises, the debt that drove growth has turned into an economic curse of sorts. To be sure, in many cases, the pressures have been exacerbated by bad decision-making. As Grid has reported, in Sri Lanka’s case, for instance, policies last year to ban chemical fertilizer imports proved catastrophic for the country’s farm sector, a central pillar of its economy, ultimately worsening its financial woes.

Still, not all indebted emerging economies are the same, as Balcells, from FIM, told Grid.

“When you think of emerging markets — when you think about the traditional countries like Mexico, South Africa, India, Brazil and others — those guys are fine,” he explained. Their economic systems, he said, have developed over the years in a way that makes it possible for them to deal with current global economic pressures.

But there is a subset, “maybe 10 percent of the emerging market universe,” where the picture is different. “A lot of it is in Africa,” Balcells said. It is not limited to the continent, however; the risks extend far beyond to countries such as Pakistan.