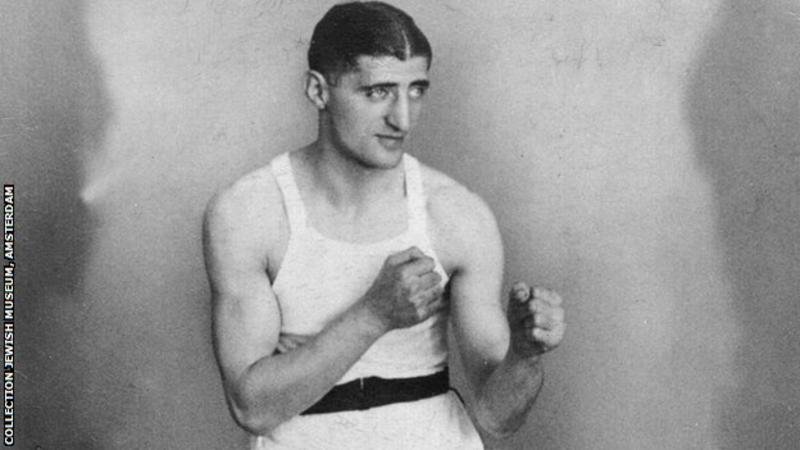 Sitting in his boxing gym just outside Amsterdam, former Dutch champion Barry Groenteman is reminiscing about the times he used to visit his grandmother.

When she was living in a retirement home and he would go to see her, he’d often come across an older man “who was always shadowboxing: in the hall, with the nurses”.

Groenteman continues: “He’d show me his ring, with the Star of David on it. And my grandmother would whisper: ‘That’s Ben Bril.'”

For the young Groenteman, it was an introduction to a man who would have a huge impact on him and whose story he feels compelled to tell.

Like him, Bril grew up as Jewish boy in Amsterdam, and – also like him – boxing became his life.

But there the comparisons end. Groenteman was born in 1986. Bril was born in 1912. By the time he reached his 30s, his life had been transformed by invasion, violence and anti-Semitism.

On Monday, the Dutch boxing world will come together to celebrate the return of the Ben Bril Memorial night, at Amsterdam’s famous Carre Theatre.

Those gathered will remember how a serial national champion was forced into hiding and then sent to the Nazi concentration camps by a former Olympic team-mate. They will look back on his remarkable survival and consider his legacy today – inside and outside of the ring.

Bril grew up in one of the poorest parts of Amsterdam as the second youngest of seven children.

It was a tough upbringing, according to Steven Rosenfeld, who is a relative of Bril’s through his wife Celia and has written a book about his life: Dansen om te overleven (A Dance with Survival).

“They lived in tenements, he didn’t sleep in a bed, he slept on straw, they didn’t have a toilet, he had to carry buckets down to the street,” Rosenfeld says.

For the young Bril, fighting was a part of daily life. There were scraps with friends of course, but also clashes with rival groups from different communities in the tightly packed city, according to Ben Braber, a historian who has written extensively about Jewish life in Amsterdam during the inter-war years.

But while some of his friends carried on brawling, Bril turned his hand to sport.

“For some boys, it was hard fist-fighting for gamblers, but other young Jews joined clubs. They were popular because the training and the matches were an escape from daily routine, also [from] daily poverty.

“And [the young men] built their self-esteem, because the art of self-defence requires courage, stamina, quick reactions but also technical skills.”

Bril was one of those young men, and his career sparked into life early when – at the age of only 15 – he was selected to fight for the Netherlands at the Amsterdam Olympics of 1928.

He turned 16 on the opening day of the Games (there are some suggestions he had to falsify his birthdate in order to qualify and was in fact only 15) and reached the quarter-finals in his weight class – flyweight.

As he got older, Bril found work in a butcher’s shop, and used his new job to help develop his sport.

“He told me that when he had to chop up meat he always used his left hand, even though he was naturally right-handed, to strengthen his left jab,” Braber remembers.

Rosenfeld recalls Ben’s “brick-like” hands, toughened, he was told, by dipping it into pickle brine