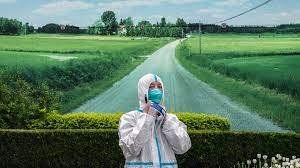 In China, a dam seems on the verge of breaking. Following a wave of protests, the government has begun to relax some of its most stringent zero-COVID protocols, and regional authorities have trimmed back a slew of requirements for mass testing, quarantine, and isolation. The rollbacks are coming as a relief for the many Chinese residents who have been clamoring for change. But they’re also swiftly tilting the nation toward a future that’s felt inevitable for nearly three years: a flood of infections—accompanied, perhaps, by an uncharted morass of disease and death. A rise in new cases has already begun to manifest in urban centers such as Chongqing, Beijing, and Guangzhou. Now experts are waiting to see just how serious China’s outbreak will be, and whether the country can cleanly extricate itself from the epidemic ahead.

For now, the forecast “is full of ifs and buts and maybes,” says Salim Abdool Karim, an epidemiologist at the Centre for the AIDS Programme of Research in South Africa. Perhaps the worst can be averted if the government does more to vaccinate the vulnerable and prep hospitals for a protracted influx of COVID patients; and if the community at large reinvests in a subset of mitigation measures as cases rise. “There is still the possibility that they may muddle through it without a mass die-off,” says Yanzhong Huang, a senior fellow for global health at the Council on Foreign Relations. “But even the most smooth and orderly transition,” he told me, “will not prevent a surge of cases.”

China represents, in many ways, SARS-CoV-2’s final frontier. With its under-vaccinated residents and sparse infection history, the nation harbors “a more susceptible population than really any other large population I can think of,” says Sarah Cobey, a computational epidemiologist at the University of Chicago. Soon, SARS-CoV-2 will infiltrate that group of hosts so thoroughly that it will be nearly impossible to purge again. “Eventually, just like everyone else on Earth, everyone in China should expect to be infected,” says Michael Worobey, an evolutionary virologist at the University of Arizona.

Read: How many COVID deaths will Chinese protesters accept?

Whatever happens, though, China’s coming wave won’t recapitulate the one that swept most of the world in early 2020. Though it’s hard to say which versions of the virus are circulating in the country, a smattering of reports confirm the likeliest scenario: BF.7 and other Omicron subvariants predominate. Several of these versions of the virus seem to be a bit less likely than their predecessors to trigger severe disease. That, combined with the relatively high proportion of residents—roughly 95 percent—who have received at least one dose of a COVID vaccine, might keep many people from falling dangerously ill. The latest figures out of China’s CDC marked some 90 percent of the country’s cases as asymptomatic. “That’s an enormous fraction” compared with what’s been documented elsewhere, says Ben Cowling, an epidemiologist at the University of Hong Kong.

That percentage, however, is undoubtedly increased by the country’s ultra-rigorous testing practices, which have been catching silent cases that other places might miss. All of Omicron’s iterations also remain capable of triggering severe disease and long COVID. And there are still plenty of worrying omens that climbing cases could reach a horrific peak, sit on a prolonged plateau, or both.

One of China’s biggest weak spots is its immunity, or lack thereof. Although more than 90 percent of all people in the country have received at least two COVID shots, those over the age of 80 were not prioritized in the country’s initial rollout, and their rate of dual-dose coverage hovers around just 66 percent. An even paltrier fraction of older people have received a third dose, which the World Health Organization recommends for better protection. Chinese officials have vowed to buoy those numbers in the weeks ahead. But vaccination sites have been tougher to access than testing sites, and with few freedoms offered to the immunized, “the incentive structure is not built,” says Xi Chen, a global-health expert at Yale. Some residents are also distrustful of COVID vaccines. Even some health-care workers are wary of delivering the shots, Chen told me, because they’re fearful of liability for side effects.

INTERACTIVE: As Malaysia readies for an influx of China tourists, here is what you need to know