Copyright 2021 - All Right Reserved
Home Business Chips are the new oil. There are no reserves.
BusinessEconomyFeaturedOpinionWorld News 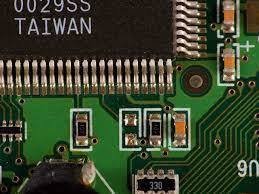 Computer chips are ubiquitous, but they’re only made in a few places.

In a single day, we interact with hundreds of computer chips, most no larger than a penny. These tiny circuits power everything from smartphones and laptops to medical devices and electric vehicles, and they’re largely responsible for our increasingly computerized lives. But in recent months, the world’s dependence on these chips has also put them at the center of mounting tensions between the United States and mainland China over Taiwan.

Taiwan is located just 100 miles from China’s eastern coast, and it produces the vast majority of the advanced chips used in today’s electronics. The island is a democracy with its own government, and is home to more than 20 million people. Officials in Beijing, however, claim Taiwan as part of China and have repeatedly threatened to invade and “reunify” the island with the mainland. The US does not officially recognize Taiwan’s independence, though President Joe Biden has suggested that he would send American troops to defend the island against an invasion. As a result, there’s fear that a blockade around Taiwan could create a humanitarian and trade crisis, ultimately cutting off the world’s access to tons of critical technology.

“If Taiwan chipmaking were to be knocked offline, there wouldn’t be enough capacity anywhere else in the world to make up for the loss,” explains Chris Miller, an international history professor at Tufts and the author of Chip War. “Even simple chips will become difficult to access, just because our demand outstrips supply.”

The world is so reliant on chips produced by Taiwan that they’ve become the new oil, according to Miller. Recent military exercises along the Taiwan Strait, the critical waterway that separates Taiwan and mainland China, have raised the possibility that China might eventually block exports out of the island, which would disrupt all sorts of technology production, though some experts say there are plenty of reasons to think that a war won’t actually happen. The chair of Taiwan Semiconductor Manufacturing Company, which makes nearly all of the world’s most advanced chips, has already warned that a war would leave its factories “not operable.”