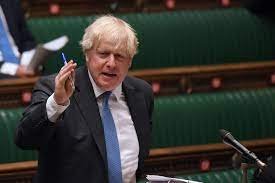 He was further wounded when the party’s chairman quit after the results came out early Friday, saying Conservatives “cannot carry on with business as usual.”

The contests, triggered by the resignations of Conservative lawmakers hit by sex scandals, offered voters the chance to give their verdict on the prime minister just weeks after 41% of his own MPs voted to oust him.

From DNA samples to children’s drawings. How Ukraine is trying to identify some of those lost in war