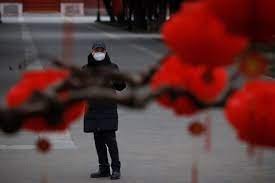 Dora Wang* longs to see her family over lunar new year, but despite the recent scrapping of Covid travel restrictions across China she has decided against travelling the 286 miles (461km) from Beijing to her home city, Dalian, in the north-east.

“I am really worried because the train stations will be packed,” said the 31-year-old illustrator, who is five months pregnant. Not having been vaccinated, the expectant mother is concerned that she might catch Covid during the long journey.

“Even though my parents have recovered from Covid, there are now so many variants out there I worry that I might catch it,” she said.

The holiday travel season starts around now, two weeks before China’s most important holiday, the lunar new year, on 22 January. Similarly to Christmas in the west, people traditionally return to their home towns to celebrate with family.

But this year, after China effectively abandoned its zero-Covid policy amid a surge in case numbers, there are widespread worries that the lunar new year rush could fuel even more rapid transmission of Covid, particularly in rural areas where there are fewer medical facilities and health workers, and less medicine and money for care.

Wang’s sentiments are shared by many Chinese residents. After years of family separation under lockdowns and harsh internal travel restrictions, many people are eager to be reunited with their loved ones but are also anxious about catching Covid.

“New year is coming and … many are travelling home, but we’re bracing for more chaos. Many are sick with fever. Hospitals and pharmacies are overwhelmed. The experts say everyone can go home for the new year, but how can we not prepare for another massive outbreak?” one person wrote online.

Those living outside mainland China are reluctant to return home while expats living in China are avoiding going home in case they might spread Covid.

“There is a huge outbreak on the mainland now and if I get infected while being back home, I won’t be able to return for the new term,” said a Chinese student studying in Hong Kong.

For some though, the chance to see family after almost three years of enforced separation is worth the risk.

“I’m not very worried about the risks of getting Covid. I feel it’s just a matter of time,” said Mei who works in Beijing but has booked a flight back to Taipei in mid-January.

Mei is planning an overseas trip with her partner, but they are struggling with their options as many countries have imposed restrictions or requirements for tourists coming from China. “We’ll have to wait and see where we can travel to,” Mei added.

China’s wave of Covid infections is overwhelming hospitals and intensive care units in many cities. The next wave of infections is likely to hit rural areas and could affect even more people than the wave racing through cities now, the British health analytics company Airfinity has warned. It estimates that about 9,000 people a day are dying from Covid in China and the figure could rise to as many as 25,000 a day this month, while the total death toll could reach 1.7 million by April.

Chinese people have turned to the internet to find out how to avoid being infected. Some experts have advised driving instead of taking public transport. One post contained a long list of “must dos” before travelling, including getting oneself and family members vaccinated and travelling only after a negative PCR test.

The “must bring” list includes a supply of N95 masks, surgical spirits, a thermometer and pulse oximeters as well as waterproof jackets and plastic bags for keeping train tickets and ID cards clean. The post also advises changing masks frequently, avoiding waiting in crowded places and disinfecting oneself and luggage before greeting family members.

Ji Ka, an opinion leader with 12 million followers on social media platform Sina Weibo, addressed his fans, saying “many of you must be worried, like me … whether they will catch [Covid] or infect their families”. In a video interview with Zeng Guang, a former chief epidemiologist at the Chinese Centers for Disease Control and Prevention, Zeng advised people to avoid travelling within two weeks of Covid recovery and to cancel trips if there was an outbreak in their home towns.

China’s cabinet said on Wednesday it would step up medicine distribution and meet the demand from health institutions, nursing homes and rural areas during the lunar new year, state media reported.

China has moved to a narrower definition of Covid deaths. Funeral homes and hospitals say they are overwhelmed, but the authorities have reported five or fewer deaths a day since the end of the zero-Covid restrictions. The World Health Organization has warned that official statistics are not showing the true impact.

At a briefing in London on Friday, Chinese embassy spokesman Bi Haibo defended his government’s definition of a Covid-related death against charges from the WHO that it is “very narrow”.

“Every country has a different definition and standard of mortality,” he said. “China will always have its own definition in accordance with our infectious disease control orders.” He refused to confirm an estimate from within the Chinese government that the country may suffer as many as 9,000 deaths a day.

He insisted the lifting of the restrictions had been part of a holistic response, and said it was one-sided and misinterpretation to claim the government was “lying flat” allowing the disease to let rip through the country.